A Very Happy 50th Birthday To 'The Very Hungry Caterpillar' 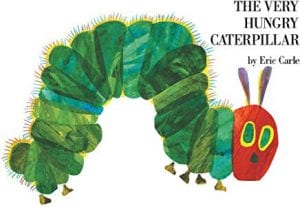 On average, every 30 seconds someone in the world buys a copy of The Very Hungry Caterpillar. Maybe it’s for a grandchild, an expectant parent or a dear friend’s new baby. Nearly 50 million copies have been sold since the classic picture book was first published in 1969, and it has been translated into over 62 languages.
Author Eric Carle, now 89 years old, lives in Key West, Fla. He was too frail to talk with NPR for this story, but earlier this year, Penguin Random House released a commemorative video of Carle musing on the book’s success.
“I think it is a book of hope,” he says. He’s wearing suspenders and a shirt that matches his lively blue eyes. “Children need hope. You, little insignificant caterpillar, can grow up into a beautiful butterfly and fly into the world with your talent. Will I ever be able to do that? Yes, you will. I think that is the appeal of that book.
“Well, I should know. I did the book, after all!”
Carle didn’t start writing books for children until he was almost 40. Born in Syracuse, N.Y., he remembers an early childhood filled with art, light and walking through nature holding his father’s hand. His immigrant parents decided to return home to Germany — his mother was homesick — and they arrived just in time for World War II. 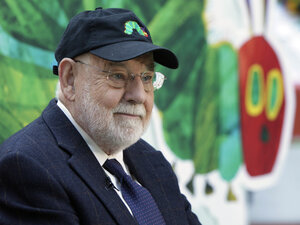 Eric Carle and his most famous creation, during a 2009 appearance on the Today show. Richard Drew/AP

Carle was beaten by teachers and shot at by soldiers, and his beloved father disappeared into a Russian prisoner-of-war camp for years after being drafted to fight for the Nazis. The man who wrote The Very Hungry Caterpillarexperienced hunger firsthand.
Carle headed straight back to the U.S. after graduating from art school at age 23 and was immediately hired by The New York Times. He served in the U.S. military during the Korean War and, upon return, moved into advertising.
Perhaps that career helped him prepare for using the simple, resonant language of The Very Hungry Caterpillar. Michelle H. Martin, a professor at the University of Washington who studies children’s literature, says The Very Hungry Caterpillar‘s writing helps little kids grasp concepts like numbers and the days of the week. (“On Monday he ate through one apple. But he was still hungry. On Tuesday he ate through two pears, but he was still hungry.”)

And the book builds literacy by gently guiding toddlers toward unfamiliar words. For example, Martin says, when Saturday comes around and the hungry caterpillar binges on “one piece of chocolate cake, one ice-cream cone, one pickle, one slice of Swiss cheese, one slice of salami, one lollipop, one piece of cherry pie, one sausage, one cupcake, and one slice of watermelon,” words like “salami” and “Swiss cheese” might be new to 3-year-olds already familiar with ice cream and lollipops.
Martin and other experts suggest that children have 1,000 books read to them before they begin kindergarten. Repeated readings of the same book count toward the total.
Some parents may feel as though they’ve read The Very Hungry Caterpillar at least a thousand times. But the repetitive language makes it easy and fun for children to “read” the book with their parents.
Carle wanted The Very Hungry Caterpillar to serve as a literary cocoon for children getting ready for kindergarten. It’s intended for children, as they prepare to leave the warmth and safety of home for school, to identify with beautiful butterflies.

This error message is only visible to WordPress admins

Please go to the Instagram Feed settings page to create a feed.