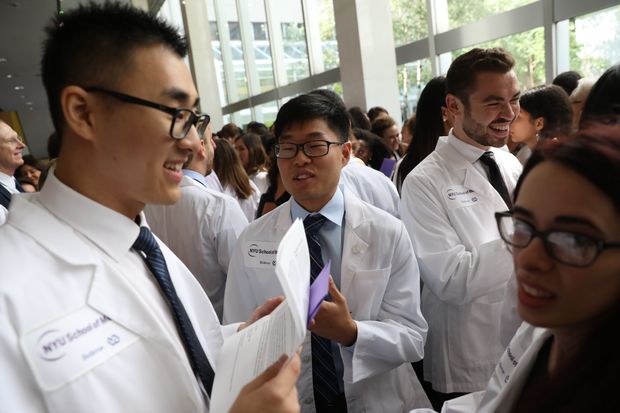 New York University announced that it would cover tuition for all of its medical students at a white coat ceremony for the class of 2022. PHOTO: BESS ADLER FOR THE WALL STREET JOURNAL
By
Melissa Korn
The Wall Street Journal

New York University said Thursday that it will cover tuition for all its medical students regardless of their financial situation, a first among the nation’s major medical schools and an attempt to expand career options for graduates who won’t be saddled with six-figure debt.
School officials worry that rising tuition and soaring loan balances are pushing new doctors into high-paying fields and contributing to a shortage of researchers and primary care physicians. Medical schools nationwide have been conducting aggressive fundraising campaigns to compete for top prospects, alleviate the debt burden and give graduates more career choices.

NYU raised more than $450 million of the roughly $600 million it estimates it will need to fund the tuition package in perpetuity, including $100 million from Home Depot founder Kenneth Langone and his wife, Elaine. The school will provide full-tuition scholarships for 93 first-year students—another nine are already covered through M.D./PhD programs—as well as 350 students already partway through the M.D.-only degree program. 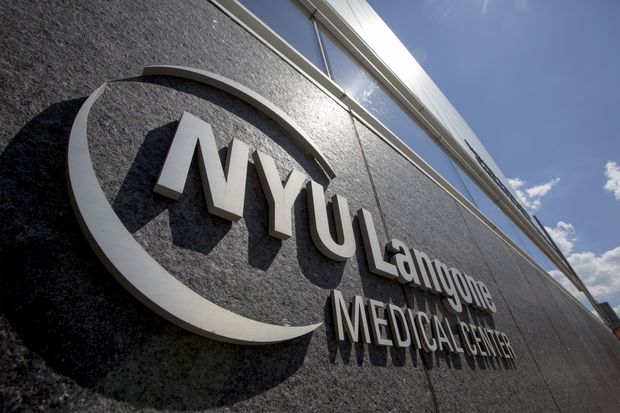 “This is going to be a huge game-changer for us, for our students and for our patients,” said Dr. Rafael Rivera, associate dean for admission and financial aid. The school will refund out-of-pocket tuition payments already made for the current year, and return loans students may have taken out.
The move dwarfs efforts by other schools, including Columbia University and the University of California, Los Angeles, to alleviate the financial strain of a medical education. Earlier this year Columbia’s Vagelos College of Physicians and Surgeons announced it would eliminate loans for all students who qualify for financial aid, while UCLA’s David Geffen School of Medicine expects to provide more than 300 full scholarships between 2012 and 2022, based on merit.
The Cleveland Clinic Lerner College of Medicine of Case Western Reserve University, with just 32 students a year, has paid full tuition and fees since 2008 in an effort to encourage graduates to pursue academic and research careers.
Nationally, 72% of graduates from the class of 2018 had debt from medical school, with a median of $195,000 in loans, according to student surveys by the Association of American Medical Colleges. More than one-third of medical students also have student loans from prior academic programs.
Sixty-two percent of NYU medical school’s most recent graduating class had student loans, averaging $171,908 for medical school and $184,000 overall. Most medical students will still need to pay for about $29,000 in annual room, board and other living expenses; tuition had been set at $55,018 for the coming year.
“There’s really a moral imperative to reduce the amount of debt people have,” Dr. Rivera said, citing concerns that loan burdens are shaping career choices and might even be scaring some prospects away from going to medical school at all.
Schools are also seeking to better reflect the population of U.S. patients in terms of race, ethnicity, gender and socioeconomic backgrounds. Asians make up a disproportionate share of medical-school classes, but other minorities are vastly underrepresented.
The median parental income for new medical-school students is $125,000, according to the AAMC.
Most medical students who want to go into lower paying practices like family medicine and endocrinology can take advantage of federal programs in which their monthly loan payments are tied to discretionary income; their loan balances are then forgiven after 10 or 25 years, depending on where they work. With compounding interest, they often don’t make much dent on the principal balance.
The salary disparity for doctors can be stark. The four lowest-paying specialties, all in pediatrics, had average annual compensation of $221,900 or below, according to a survey of more than 65,000 doctors by Doximity, a medical social network for clinicians. Doctors specializing in internal medicine had average annual compensation of $260,000.
Meanwhile, neurosurgery was the top-paying specialty last year, with average compensation of $662,755. Thoracic surgery and orthopaedic surgery rounded out the top three, at $602,745 and $537,568, respectively.
There’s no guarantee that schools’ new scholarships will push more students into less lucrative specialties or underserved communities, as the tuition payments aren’t tied to any career commitment after graduation. But school officials are hopeful.
“If you’re faced with debts that you’re likely to have into your 50s, it’s got to have an influence on what you choose to do,” said Dr. Lee Goldman, dean of Columbia’s Faculties of Health Sciences and Medicine. Published tuition for that school is $61,146 this year; including living expenses, students can expect to shell out between $92,311 and $100,665, the school says.

Columbia’s yield, or the share of admitted students who actually enrolled, increased by 1% this year in the wake of the financial aid announcement, and the school anticipates an even higher yield in the future.
UCLA boasts on its website that students have turned down offers from the University of California, San Francisco, Harvard University and Stanford University to attend its medical school, thanks to merit scholarships covering all costs for up to 20% of students. Those are funded by a $100 million gift made in 2012 by entertainment mogul David Geffen.
“I don’t know of any schools that would not want their students to graduate debt-free,” said Dr. Roy Ziegelstein, vice dean for education at the top-ranked Johns Hopkins University School of Medicine. “All schools are aiming for that end result.”
Median debt for Hopkins medical students who borrow is around $110,000, well below the national median.
Dr. Ziegelstein commended Columbia and other schools for their financial aid initiatives. “I love it. And I’m trying to do the same thing,” he said.
Write to Melissa Korn at melissa.korn@wsj.com
Corrections & Amplifications
NYU will provide full-tuition scholarships for 93 first-year students—another nine are already covered through M.D./PhD programs. An earlier version of this article incorrectly gave the numbers as 92 and 10.

School's out for Summer! And for most moms, our no

The Westchester Children’s Museum emerges from i

✨How to Prep Your Child For Sleepaway Camp✨ An